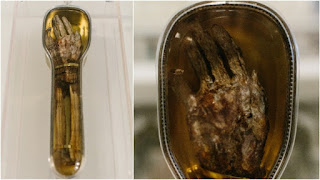 directly from CBC-
The month-long cross-Canada tour of a Catholic relic — the severed arm of St. Francis Xavier — is ending in Ottawa this week.

St. Francis Xavier was a Catholic missionary and his arm is considered sacred because he baptized more than 100,000 people with it.

Xavier died in 1552 and his body remains in India, but the Catholic Church removed his arm.

This is the first time the relic has ever been in Canada and one of only a handful of times it has left the Vatican.

And then, somebody says, "It's kind of like the Stanley Cup".


And on a partially unrelated note:

In case you're thinking what I'm thinking:
People ate mummies in the 1800's

But wait, there's more:
This is an update, because I only just now discovered that, yes, the circumcised foreskin of Jesus is one of the holiest of relics, and it's called the Holy Prepuce, or the Holy Foreskin. 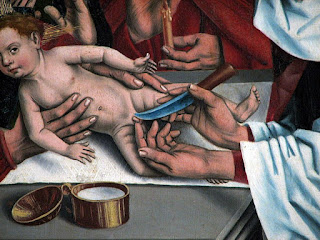 Posted by Self Replicate at 2:27 PM