Charles Darwin used the taxonomy of Language to explain his theory of evolution. 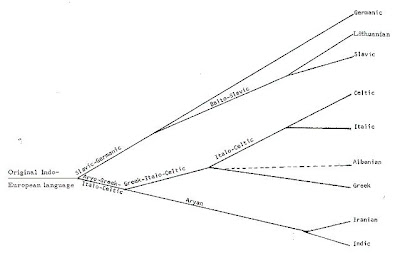 That means we assigned what we now know as the process of biological evolution to language before we understood it regarding living organisms.

That is crazy. How is this not the most mind-shattering part of “Charles Darwin” and his theory and the whole science of Evolutionary Biology?

“It may be worthwhile to illustrate this view of classification, by taking the case of languages. If we possessed a perfect pedigree of mankind, a genealogical arrangement of the races of man would afford the best classification of the various languages now spoken throughout the world... The various degrees of difference in the languages from the same stock, would have to be expressed by groups subordinate to groups; but the proper or even only possible arrangement would still be genealogical…”

-Darwin, C. R. 1859. On the origin of species by means of natural selection, or the preservation of favoured races in the struggle for life. : John Murray. [1st edition]

Steven Pinker - The Genius of Charles Darwin: The Uncut Interviews

Posted by Self Replicate at 6:29 PM